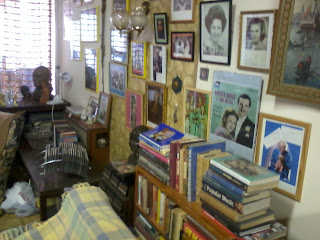 I began my singing studies with famous British duettists Anne Ziegler and Webster Booth, when I was seventeen. Two years later they asked me to act as studio accompanist for Webster. I completed the ATCL and LTCL singing diplomas and remained friends with them until their deaths. I completed the LTCL in piano at Trinity College, London in 1968. I hold a BA (Honours) (SA) majoring in History of Music, History and English.

Since 2006 I have published several books about Anne Ziegler & Webster Booth.
I have reduced the price on my books - both E books and paperbacks -  so they are all quite affordable. I am giving links to paperbacks here, but you can see the E books (which are considerably cheaper) on the site. Click on the links below for further information, previews and review of the books.


SWEETHEARTS OF SONG: A PERSONAL MEMOIR OF ANNE ZIEGLER AND WEBSTER BOOTH

List Price: £11.00
Price: £9.90
You Save: £1.10 ( 10% )
Ships in 3–5 business days
Jean Collen began her singing studies with the famous British duettists Anne Ziegler and Webster Booth, in Johannesburg, when she was 17. Two years later they asked her to act as Webster's studio accompanist when Anne - who accompanied their students - had other commitments. This was the beginning of a close friendship which lasted until their deaths. The book gives a summary of Anne and Webster's rapid rise to fame, which is already well documented in their own autobiography entitled Duet (1951). The book's main focus is on their lives and careers from 1956 in South Africa and their "third" career when they returned home to the UK in 1978.

MARGARET A. PLEVIN - 3 September 2013
What an awesome testament this book is to such a great couple. How touched they would have been if they could still have been here to read it.  The  testimonies and memories of friends of the couple I also found interesting and moving.  I was always a great fan of Anne  & Webster and this book gave me such insight into their lives and all they had achieved over the years and how many lives they had touched.  Ms. Collen is to be highly commended for this excellent, insightful book. It deserves the highest rating."
Yours sincerely
Margaret A. Plevin

These reviews were originally posted on Lulu. For some reason they have been removed from Lulu but now appear on the Good Reads site at the following link: BOOK REVIEWS

A SPARKLING INSIGHT TO TWO GREAT SINGING STARS 4 May 2006 by arrival
A beautifully written account of the lives of these two great singing stars of yesteryear, by someone whose life was to become intermittently interwoven throughout a long and memorable forty year period. If like me, you adore these great Artistes, then you won't be able to put this book down! A true and sometimes 'sad' angle of British stardom and its pitfalls, yet a living sparkle emanates from every page. After reading this memoir, one is left with the feeling of nostalgia and also a feeling one has known this talented married couple. Personally told by a lady whose warm and generous heart has 'opened up' her fondest memories, and been kind enough to share them with us. When finished reading, you will be left with a conviction that these two remarkable names: WEBSTER BOOTH and ANNE ZIEGLER should never be forgotten. The book is simply 'unputdownable'.

This review is from: Sweethearts of Song: A Personal Memoir of Anne Ziegler and Webster Booth (Paperback)

This delightful book falls into the rare category of a personal memoir not about the person writing it but about two other people of talent. The upshot is two main characters brought to vivid life by the minutiae of everyday living recorded over an almost epic period of time (forty plus years) and a third character, the author, thrown into equally stark relief by her interactions with, and reflection on, them. A further factor of great importance highlighted in the book is the fact of migration, the two main characters as well as the author all being British-born and living in South Africa for a fair spell. The complex interplay of all of the above makes for a fascinating read not encountered often these days with its tales of ready-made solutions to spuriously complex problems or, in fact, fairly shallow neuroses. Overlying the innate complexity of the personal relationship of the three rounded characters referred to above is the many-splendoured realm of art in its guise of serious song taken to an even higher level of complexity in the spiritual sphere by the concurring of the author with Webster's opinion their, or at least his, best work was done in the field of oratorio. The shifting scenario, from the U K and the U S A to Johannesburg, Knysna, Somerset West, and finally back to the U K and, in particular Wales, makes for exciting reading in that the style reflects the differing emphases in great and loving detail. Following the aforegoing subtleties of shifting aspects of reality the set of memories of Anne Ziegler and Webster Booth, adduced at the back, add a final lustre to a loving and complex portrait of several lives in vital and vibrant interplay. All the foregoing aspects are made possible by a simple and direct prose style, which is one of the book's greatest attributes, somewhat along the stylistic pleasures of Gaius Julius Caesar describing the Gallic and Roman civil wars and Blaise Pascal analysing mathematical and social structures. A salient example, chapter 16 on the 1973 East London production of The Mikado, will suffice, representing the truly complex undercurrents between professional and amateur ardours about the same production in an almost offhand mode encapsulated in a simple style of stark statement pregnant with knowing innuendo. Therefore, in summation, a marvellous book about a fascinating subject really intelligently written. Read it and dare to contradict the above views. Johan Geldenhuys.

Affirmation, January 27, 2009 By Ian Harris (Czech Republic)
This review is from: Sweethearts of Song: A Personal Memoir of Anne Ziegler and Webster Booth (Paperback)

I have read Johan Geldenhuys' superb review and find that I simply have no words to add to his. I certainly am not disagreeing with his verdict - to the contrary, I only wish I could have expressed my opinion of Jean Collen's memoir half as articulately! Jean writes in a direct and, at the same time, very expressive style. I found that I was not able to put this book down until I had read the final page. This, surely, is the only true judgement of any writer's craft
A SCATTERED GARLAND: GLEANINGS FROM THE LIVES OF WEBSTER BOOTH AND ANNE ZIEGLER
By Jean Collen

List Price: £14.00
Price: £12.60
You Save: £1.40 ( 10% )
Ships in 3–5 business days
An updated and enlarged edition of A Scattered Garland: Gleanings from the lives of Webster Booth and Anne Ziegler is a compilation taken from a wide variety of sources, interspersed with my own comments. Although the book is primarily an informal reference work, it clearly shows the progress of Anne and Webster’s careers. It also lists a variety of engagements of his second wife, Paddy Prior. The compilation covers Anne and Webster’s musical and theatrical ventures from Webster’s first professional engagement with D’Oyly Carte in the early nineteen-twenties to Anne’s final broadcast towards the end of the century. The book is over 400 pages in length and is liberally illustrated.
DO YOU REMEMBER ANNE ZIEGLER AND WEBSTER BOOTH?
By Pamela Davies and Jean Collen.
Paperback, 171 Pages

List Price: £10.00
Price: £9.00
You Save: £1.00 ( 10% )
Ships in 3–5 business days
This book tells Pamela Davies' story of her keen admiration of Anne Ziegler and Webster Booth in the forties and early fifties. Shortly after Anne and Webster returned to the UK from South Africa in 1978, Pamela began corresponding with Anne and became good friends with her. The book includes THE BODY OF WORK OF ANNE ZIEGLER AND WEBSTER BOOTH, compiled and edited by Jean Collen. Jean has listed many of their engagements on stage, screen, radio and television from 1924 to 1994.
ON WINGS OF SONG
By Jean Collen, Pamela Davies

WEBSTER BOOTH AND ANNE ZIEGLER : EXCERPTS FROM GRAMOPHONE AND DISCOGRAPHY
By Jean Collen

List Price: £6.50
Price: £5.85
You Save: £0.65 ( 10% )
Ships in 3–5 business days
This is the third edition of this book. It is made up of articles and reviews about the recordings made by Webster Booth and Anne Ziegler (1929 to the present). The discography section has been completely revised and updated and includes an almost complete discography of their solo and duet recordings and some of their surviving radio broadcasts.