PLAYLIST OF FINAL PODCAST ON THIRTIETH ANNIVERSARY OF THE DEATH OF WEBSTER BOOTH. 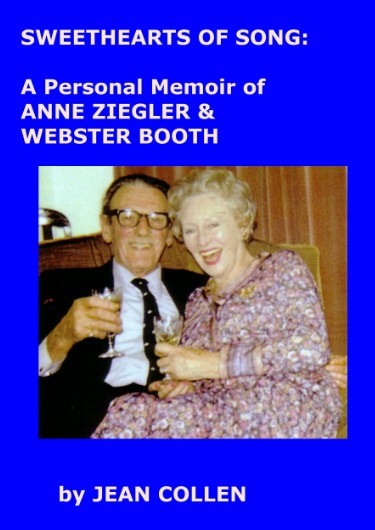 I can hardly believe that it is thirty years since a friend phoned to tell me that she had heard of Webster’s death on News About Britain on BBC World Service. I had known that he was ill, but it still came as a shock to hear that my beloved friend had died in Penrhyn Bay, Llandudno at the age of 82. I think this is a fitting day on which to present my final podcast in this series. These podcasts have largely been created for members of my Webster Booth-Anne Ziegler Yahoo group, the 78rpm Community, and the AZ-WB fan pages on Facebook, but I am very glad that they have reached a wider audience who appreciate the singing of Webster and Anne and other artistes of their generation.

In this episode you will hear the voices of Anne and Webster, and some of Webster’s favourites – Dundee pianist, Fred Hartley, Australian bass baritone Peter Dawson, Australian baritone, Harold Williams, soprano Isobel Baillie and his favourite tenor, Jussi Bjorling.

I have created a blog about Webster Booth as a solo artist. It includes information about his life, videos, recordings and podcasts.WEBSTER BOOTH

You can see complete playlists of all my podcasts; listen to all my podcasts and recordings, and see selected YouTube videos related to Anne and Webster at this blog:ZIEGLER-BOOTH-RADIO.

Listen to many of Webster and Anne's solo and duet recordings on my You Tube channel at:DUETTIST'S CHANNEL.

Listen to Webster's solo recordings (as videos) on the Daily Motion site at:http://www.dailymotion.com/user/duettists1/1

My Webster Booth- Anne Ziegler Yahoo group has been running for 4 years. You might like to join it at: http://uk.groups.yahoo.com/neo/groups/booth-ziegler/info

Because (Guy d’Hardelot) Webster Booth with orchestra conducted by Clifford Greenwood. The recording was made in May 1939, B8920

Still as the Night (Carl Bohm) (arranged by Doris Arnold) Webster Booth and Anne Ziegler, with orchestra conducted by Eric Robinson. Recorded on 22 December 1947. HMV B9627

Here in the Quiet Hills (Gerald Carne) Webster Booth and Anne Ziegler, with orchestra conducted by Eric Robinson. 1950. HMV B9830

Lords of the Air, sung by Harold Williams, recorded 1941